For Kids: What is the Alamo? The Alamo is a real place. It is located in San Antonio, Texas. Today, San Antonio is a modern, beautiful city. But a long time ago, San Antonio was once part of the Spanish Territory of Mexico in the New World. The Alamo is the ruin of an old Spanish mission. Spanish missions were churches and the homes of Catholic priests. It was the hope of these priests that they could convert the native tribes to the Catholic religion. They used the missions as centers of education. Spanish missions were built all over the Spanish Territory of Mexico. Some missions flourished. Others were abandoned or converted to forts. The Alamo was once a mission, then a fort, and today is one of the top tourist attractions in the State of Texas. In fact, it is one of the top tourist attractions in the United States. So what is so important about the Alamo that 2.5 million people visit this ruin each year?

Land for Sale at 12&1/2 Cents an Acre, the Deal: At the time, Texas covered a lot of land, including not only much of modern day Texas but also a portion of modern day New Mexico, Kansas, Colorado, and Wyoming. Yet, there were only about 4,000 people living in the Mexican State of Texas. Texas needed colonization, people to move in and settle, who would defend the land from Indian attacks. Stephen Austin's father had negotiated a land grant from Mexico shortly before Mexico's independence. This grant was an approval to settle 300 American families on 200,000 acres in the Mexican State of Texas. After his father died, Stephen Austin managed to expand that grant to include many more families on much more land. Land was offered for sale at 12&1/2 cents per acre. That price was about 1/10th the price of land anywhere else at the time in the west.

The Rules: There were some rules on this deal imposed by the Mexican government. For one, people had to be approved prior to purchase. The Mexican government did not want criminals on the run or people fleeing debt. They wanted hard working families committed to developing their acreage with crops and cattle and willing to fight to keep it. There was also a limit on the amount of acreage that any one buyer could buy. There were other rules too. Americans who took advantage of this deal had to agree to:

People poured into Texas to buy land. It was called “Texas fever.” They settled. But they did not obey the rules. Many did not become Mexican citizens or change their religion. Many had slaves.

1833, Santa Anna: A Mexican general named Antonio Lopez de Santa Anna was angry that Americans took advantage of this deal but ignored the rules. Santa Anna was a hero during Mexico’s battle with Spain for independence. He was easily elected president of Mexico. Once elected, he threw out the Mexican constitution, wrote a new one - a far less democratic one - and made himself a dictator. Some Mexican states rebelled. Santa Anna sent his army to put down rebellion and punish those states.

Feb 22-March 6, 1836: Attack on the Alamo: To squelch the rumblings of rebellion in the Mexican State of Texas, Mexican President General Santa Anna took more than 1500 men with him to attack a little mission in Texas that had been converted to a fort. It was called the Alamo. About 250 Texans occupied the Alamo while Santa Anna laid siege. The Texans held out for 12 days. On day 13, resistance collapsed. William Travis, Jim Bowie and Davy Crockett were among the defenders who died. Survivors, mostly women and children, were sent home to spread the word that Santa Anna’s army was unbeatable. Instead of fear, the cruel attack on the Alamo, and the bravery of the men who died fighting, became a battle cry - “Remember the Alamo”. Many Texans joined the fight against Mexico. Texas won! 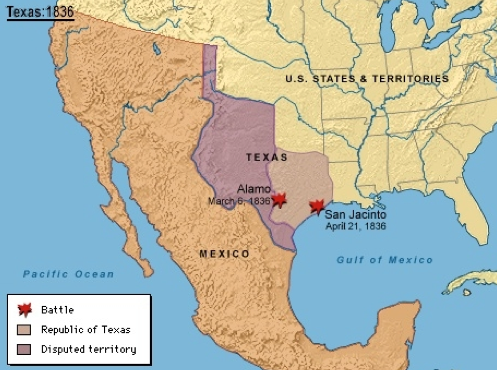 April 21, 1836: A New Country is Formed - The Republic of Texas: The revolution ended when Sam Houston brought his entire force to the little town of San Jacinto, in the middle of the day, to attack Santa Anna’s force while they were taking a siesta. Santa Anna managed to get away, but Sam Houston’s men captured him the next day, hiding in some bushes. Santa Anna agreed to recognize Texas independence, and ordered his troops to leave Texas. Texas became a newly formed country.

Border Skirmishes:: That should have been the end of it. But Mexico did not want to give up that much land or the riches it provided. Texas was a huge producer of cotton. It had cattle, timber, clean water, and migrating herds of buffalo. There was a great deal of disputed territory that Texas insisted was part of Texas. Mexico insisted it belonged to Mexico. There were constant border skirmishes.

1845: Texas becomes the 28th US State: To solve things, Texas asked to be annexed into the United States. Texas believed joining with the United States would end their battle with Mexico. Back then, the United States was divided into free states and slave states. Texas wanted to join the Union as a slave state. That would upset the balance of power in Washington. The abolitionists, who were against slavery, blocked annexation. But finally, in 1845, encouraged in part by a belief in Manifest Destiny, Congress invited Texas to become the 28th state.

Still, border skirmishes continued. This was a major cause of the Mexican-American war, a war America won. The battle cry, “Remember the Alamo” rang out again.

The cry “Remember the Alamo” is still used today as a call for bravery and as a symbol of heroic struggle against impossible odds in the fight for freedom from oppression. The Alamo itself remains hallowed ground.

The Road to Texas Independence for Kids - game, short movie

The Mexican American War with interactives

Manifest Destiny - in support of the annexation of Texas